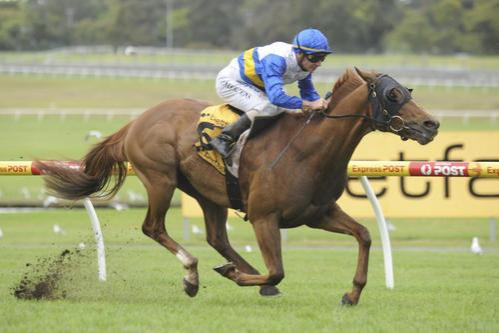 A trip to Sydney for the 2011 Christmas Cup at Rosehill next month is on the cards for Colin and Cindy Alderson’s Cranbourne-based galloper Sea Galleon after their impressive turf triumph at Sandown on Saturday.

Five-year-old Galileo gelding Sea Galleon stormed away to win the D’Urban Handicap (2400m) on a Heavy (8) track at Sandown Hillside by an easy four lengths on the weekend, Alderson quick to hint at a Sydney summer campaign for the now four-time winner.

“He lapped up the conditions and I think he’s going to keep on improving as the distance progresses,” Alderson said.

It was Sea Galleon’s second win on the trot this month having earlier saluted in a 2040 metre handicap at Moonee Valley on November 19, Alderson not quite sure what to credit for the galloper’s purple patch.

“I don’t know whether it’s maturity but he’s racing really well,” she said.

“He likes the cut out of the ground and it’s actually good to see him fulfill his potential.”

The former South Australian Derby placegetter could now get to strut their stuff in Sydney for the first time in the coming weeks, Alderson naming the popular $100,000 Listed Christmas Cup (2400m) at Rosehill on December 12 as a possible off-season goal for Sea Galleon after Saturday’s success.

“I might even take him to Sydney for the Christmas Cup,” Alderson said.

“I’ve always been keen to see him go that way.

“Every time we’ve worked him that way (the Sydney way) the rider has said he’s incredibly comfortable.”