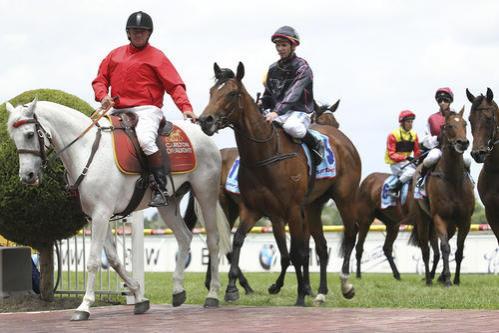 Lightly raced filly Her Diamond Rock is quickly working towards repaying her $160,000 purchase price and rewarding the faith connections have in her pedigree.

The owners were all partners in her half brother, exciting Bel Esprit galloper Spirited Hero, who was retired prematurely after winning two of his only four starts.

The group was rejoicing again after the Colin and Cindy Alderson-trained daughter of Fastnet Rock and Snow Hero landed Saturday's WAFEX Sovereign Plate (1400m) at Caulfield.

Cindy Alderson was mobbed by the crowd of owners who have already seen Her Diamond Rock win at Moe and finish second at Sandown a week ago.

"She is very, very professional for a horse that has had only three runs.

"She has improved every run and on the good track today showed a good turn of foot."

Ridden by Peter Mertens, Her Diamond Rock was on the pace all the way and scored a half length win over Vain Attraction and Lenore.

Alderson said there were high hopes for Spirited Hero until he suffered a wind problem.

He was in the same Bel Espirit crop as Black Caviar and cost $95,000 as a yearling but only won just over $30,000 with wins at Sale and Bendigo.

Her Diamond Rock was purchased at the Melbourne Premier sale and has already earned around $74,000 from her three starts.

"All the owners have come today and they were in the half brother with me who had a bit of misfortune but had a huge amount talent so hopefully she will pick up where he left off," Alderson said.

"She is in only her first prep and I think going to improve next time around.

"She had shin soreness early on but appears to be over that now and I was surprised how well she did it today."