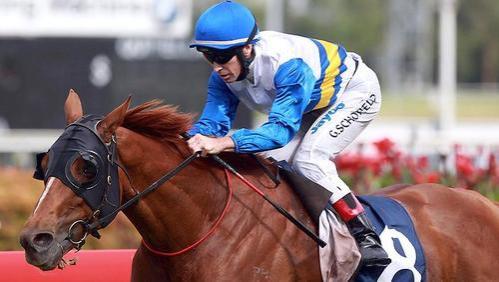 THERE was still 600m to go but Sea Galleon's rider Glyn Schofield knew the moment had arrived - he could wait no longer.

"They had gone so slowly I had to go," Schofield said.

"I knew I was on the only horse in the race with a turn of foot and I thought if I pinch a break on them now, they won't catch me."

And so it proved, as Melbourne stayer Sea Galleon turned the Listed $100,000 Christmas Cup (2400m) at Rosehill yesterday into a one-horse race.

The feature staying event was run at a farcical tempo mid-race, prompting most riders to make their moves well before the home turn.

Then, suddenly, the Christmas Cup resembled the Charge of the Light Brigade with a line of eight horses spread across the track and disputing the lead.

But within a matter of strides, Sea Galleon broke clear of the ruck, dashed three lengths clear on the final bend and the race was over.