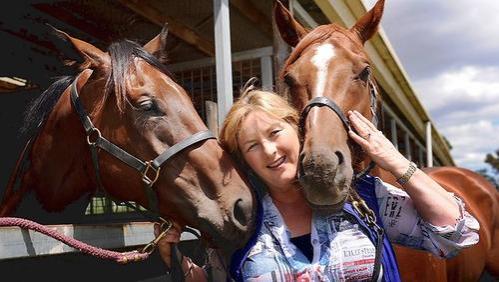 CINDY Alderson's road map to riches will be tucked under her arm at Caulfield on Saturday.  The Caulfield Cup is eight months away but there is a new trail to it, and Alderson is on it.  The Australian Guineas is around the next corner, and Alderson is on track for that, too.
In terms of direct routes to short and long-range destinations, Caulfield is an important start for Alderson's top pair Sea Galleon and That's The One.
Sea Galleon's ambitious target, the Caulfield Cup, is on the far horizon but the best way there for the five-year-old is here and now.
The 2000m Reaan Plate at Caulfield is a prelude to the 2400m Mornington Cup on February 15, which provides its winner with automatic entry to the Caulfield Cup.
"It would be fantastic if he could pull it off," Alderson said yesterday of the Mornington Cup.  "It's a different kind of campaign, more one of those light European campaigns, which we've had to adapt to because the opportunity of qualifying for the Caulfield Cup at Mornington wasn't previously there."
Alderson said the test for Sea Galleon, who was the dominant stayer of the late spring and early summer, was to prove Caulfield Cup-worthy and capable of running as well on firm summer tracks as he did on spring tracks with give.
"That's the little niggle in the back of my mind, that his best efforts have been on tracks with a little give," she said. "Obviously he has to prove up to the class of a Caulfield Cup.
"You could argue he wasn't beating much, but you have to dare to dream, otherwise you wouldn't get up at 4am every day, and we're entitled to dream a bit with him."
Alderson said recent Caulfield Cups suggested superstars no longer won it.
"In the old days you'd get your weight-for-age horses running but now they seem to concentrate on Cox Plates, Mackinnons and Melbourne Cups," she said.
"And it doesn't seem to be the preferred option for the Europeans. The way it's run, on from the start, maybe best suits Australian horses. I'm not saying it's weak - try winning it - but I'm saying it might be worth having a crack at."
Also worth a crack is the 1600m Australian Guineas at Flemington on March 3.
That's The One, a swooping winner over 1200m and 1400m in the spring, resumes at Caulfield in the 1200m Australasia Stakes. TAB Sportsbet has him at $61 for the Guineas.
"We're keen to get him up over a mile in the Guineas and even up to 2000m. He's come back really well," Alderson said.