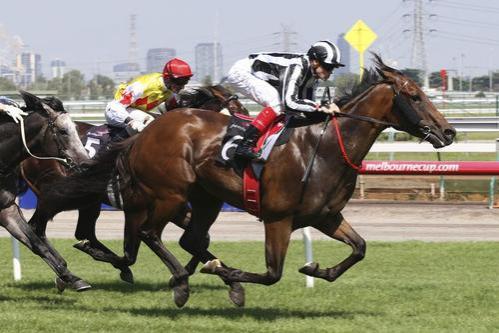 IN the space of 40 minutes, after two almost unimaginable shocks, the Australian Guineas was turned on its head.

First, Guineas second-favourite Mosheen came unstuck at long odds-on in The Vanity, then Helmet, the Guineas hot-pot, was beaten out of a place after being cluttered up in the C.S. Hayes Stakes.

Helmet retains favouritism at $2.70 for the $1 million Guineas, run at Flemington on March 3, but That's The One, a $67 chance a fortnight ago, has leap-frogged Mosheen into $6.50 second favouritism.
Mosheen is on the drift, out to $9.
While there were excuses for Helmet, there was no denying the win of the Colin and Cindy Alderson-trained That's The One ($7.50) , who circled the field before scoring a commanding length win over brave Decircles ($7.50), who kicked clear on straightening after leading.

Cindy Alderson said she was mindful Helmet would improve dramatically come the Guineas, but said there was great merit in That's The One's win.
"He (Craig Williams) had the horse underneath him; he was fit enough, he took it to them and he hung on well in the end," she said.
"I think Helmet wasn't particularly suited today and he's still got to be the measuring stick but he (That's The One) did a lot of work.
"He made a long run around them and was strong to the line. He's always shown us he had the ability, right back here when he won second up and ran the fastest 800m of the day.
"He's always had the talent but he's had a few issues with temperament but he's starting to come right.
"When I walked into the track today he really looked on his game and maybe this is his time."
The dye was cast after 200m for Helmet.
At best when either high-balling in front or swooping with room, jockey Kerrin McEvoy found himself cluttered behind runners on the rail.
As Helmet over-raced, then struggled to accelerate through gaps in the straight, Williams had That's The One in full flight out wide.
"He still did a bit wrong, got his head on the side," Williams said. "It's all in front of him."