Al Karam jumps up in class 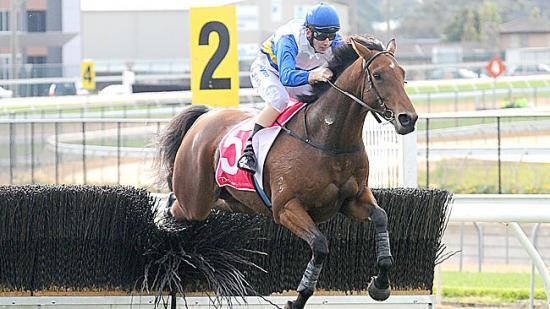 With champion Black And Bent, who was to be switched to fences before his injury, and Warrnambool Grand Annual winner Awakening Dream non-runners, Al Karam has credentials as good as any other contender for the 4500m Grand National at Sandown on July 29.
Bedggood said the Colin and Cindy Alderson-trained horse finished third in last year's Grand National, and had missed Oakbank and Warrnambool.
"The plan all preparation has been this race. It's normally an afterthought for people," Bedggood said.
"He's a class horse. Whatever Col and Cindy run him in, he's going to be very competitive.
"What else is there that wasn't here today? Titch may go steeplechasing, but he (Al Karam) is the benchmark horse. He's missed Oakbank and Warrnambool. He's got fresh legs. Onwards and upwards. Today was a bonus."

Although he made a couple of mistakes early in the 3320m race, Al Karam showed ticker to reel in Brierly Steeplechase winner Fareer, who shot 1 1/2 lengths clear 600m out.
"I gave him a squeeze at the 800m. And after jumping the second last, he really picked it up another gear," Bedggood said.
"It was really good. The better the ground, the better he will go."
Al Karam comfortably defeated Fareer, the mount of Steve Pateman, who had earlier won the two hurdle races on Token Of Honour and Palmero.
Pateman predicted a big future for the David Hayes-trained Token Of Honour, who won by 10 lengths on his jumping debut.