Alderson winter army out in force 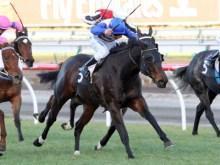 Montgomery and Perturbo to continue their winter challenge preparations


Colin and Cindy Alderson will continue their assault on next month's rich Winter Finals Day when racing returns to Flemington tomorrow.

Seven days after their TROA/Luxbet Winter Championship contender Chosen To Fly won at the same course, the Aldersons' Banjo Paterson Series and All Victorian Sprint Series contenders will round out their preparations.

Montgomery will be chasing back-to-back wins, having scored a strong win at Caulfield on 26 May. The six-year-old is up in weight and back in distance, but Cindy Alderson said the race fits perfectly for the son of Montjeu.

“He doesn't do a lot between races, he's a lightly-framed horse who seems to like being raced sparingly and trained quite lightly, hence why he's running over 2000 metres instead of 2400,” she said.

“He's stepping up quite a lot in weight for this race, I think he goes up five kilos, and he's back in distance. So there are a few negatives there but he's well and I expect him to be running on at the finish.”

Perturbo will also launch a run from the rear of the field in the Cafetto Sprint. The gelding is second-up, having resumed with an inconclusive 11th at Flemington on 19 May, when he was one of only two horses who travelled down the outside rail.

He was scratched last week because of the Slow track and while the Flemington course carried that rating this morning, it is a chance of entering the Dead range with no further rain before race time.

“He looks really well and he's bright and happy in himself,” Alderson said on RSN. “He's a stable favourite, we love having him about the place, and this is his sort of race.”

Ben Melham will again partner Perturbo, who is a $7 chance in the Cafetto Sprint market, which is headed by classy mare Rue Maple ($2.60), while Glen Boss retains the ride on Montgomery. He is a $10 chance in market headed by Peter Moody's Turnitup.