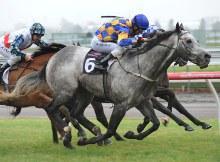 Chosen To Fly and There's Only One will be racing for much more than the $90,000 first prizemoney when they contest the Listed TROA/Luxbet Winter Championship Final (1600m) at Flemington this Saturday.

Victory by either in the richest of six finals to be run as part of the Victoria Racing Club's Winter Finals Day program will earn connections a $50,000 bonus.

The sweetener was on offer to any horse that could head the leaderboard after the six heats that were run on city and regional tracks during May and June and then go on to win the final.

Chosen To Fly and There's Only One enter the $150,000 final locked together on 20 points at the head of the leaderboard after winning two heats each.

The Colin and Cindy Alderson-trained Chosen To Fly will be chasing a hat-trick of Flemington wins after heat victories on 19 May and 9 June, while Peter Moody's There's Only One won the most recent Flemington heat – on 23 June – having won the Sale qualifier at her previous start.

Both were set a task at the barrier draw, however, with Chosen To Fly allocated gate 15 in the field of 16 plus three emergencies with There's Only One to start to his immediate outside.

The only other heat winner in the race, the Doug Harrison-prepared Galileo Gold, a last-start winner at Bendigo, fared much better at the draw and will start from gate three.

The past two winners of the Winter Championship – Doubtful Jack and Glaneuse – will chase another win, from barriers 18 and nine respectively, while Provincial Plate winner Menados (five), the Group-placed Lord Pyrus (eight), former classy staying three-year-old Yulalona (13) and recent Flemington winner Gail (four) are among the others engaged.

The Winter Championship Final is one of two Listed events on an eight-event card that includes the $100,000 All Victorian Sprint Series Final.

Chosen To Fly's stablemate Perturbo will chase back-to-back wins in the 1200m event, which sees recent Flemington winners Beyond Pardon, Broken, Verdasco and Gossip Girl also ngaged along with former Queenslander Ready To Rip, a new acquisition to the Moody stable.

The other open series to conclude is the Banjo Paterson Series, over 2600m, in which Daryl Dodson's evergreen mare Swooper will be chasing back-to-back titles against the likes of My Bentley, Montgomery, Crabs and Streaky Fella.

The Moody-trained Club Command will chase a Saturday metro hat-trick in the TVN/Slickpix Silver Bowl Final (1600m) for the colts and geldings, while his Moody stablemates Dayita and Aliberani are among the leading contenders for the Rivette Final for the fillies.

Ben Knobel has an unassailable lead in the series that offers points on a 12-6-4-2-1 basis to the first five over the line in designated races but he gets the chance to round out the series with a win aboard Tasmanian visitor Banca Mo.

Full fields for all races on the Flemington card, which also features the Victorian Carbine Club Plate for two-year-olds, featuring Isabella Snowflake, and the Australian Lamb Company Handicap for three-year-olds, are available via the link.