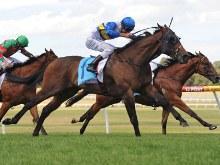 Cindy Alderson is yet to be convinced that Perturbo can make it back-to-back wins in Saturday's All Victorian Sprint Series Final at Flemington, but that doesn't mean she doesn't harbour high hopes of winning the Listed feature.

The Cranbourne horsewoman, who trains in partnership with her father Colin, will also be represented by Del Palio in the $100,000 event.

The four-year-old son of Invincible Spirit has had a productive campaign, winning three of eight starts stretching back to early December and last start was beaten just three quarters of a length when third behind Beyond Pardon and Dash For Viz at Flemington.

“He's been a revelation this preparation, it's been a long preparation, but his form has held strong all the way through,” Alderson said.

“Last start, over the 1000 metres, Steven King felt that if the track had been drier he would have won. He said he wasn't letting down at all, but he did handle the straight really well and if he gets a suitable track he will be a chance.”

King retains the ride aboard Del Palio, who will carry just 54kg in the event in which his stablemate is the 60kg topweight.

That is 2kg more than what Perturbo carried to victory in last year's All Victorian Sprint Series Final, when he held off subsequent Group 1 Stradbroke Handicap heroine Mid Summer Music, and Alderson thinks he is due for a change of luck after two unplaced runs this time in.

“He's had one of those campaigns where things haven't gone right for him and I don't even know whether we'll get the right track for him on Saturday either,” Alderson said.

“I think he's probably got his fair share of weight and the weights seem to be slowing him down a little bit now that he's got a bit older, but he's certainly in good physical condition.”

The Flemington track was rated a Slow 7 on Thursday afternoon, but improvement is likely with fine conditions predicted through until Saturday.

Perturbo is an $11 chance with TAB Sportsbet, which has Del Palio on the $6 third line. Recent Peter Moody acquisition Ready To Rip, who opened at $10, has been crunched into $5 favouritism with Gossip Girl the $5.50 second elect.

The All Victorian Sprint Series is one of three races on the Winter Finals Day card in which the Aldersons are represented.

Chosen To Fly will be chasing a hat-trick of Flemington wins when he tackles the likes of There's Only One and Menados in the $150,000 Listed Winter Championship Final (1600m).

The son of Choisir, who has drawn gate 15, will collect a $50,000 bonus in addition to the $90,000 first prize if successful on account of being the Winter Championship's equal leading points-scorer heading into the final.

“This is his first time at the mile, which is always a bit interesting, but he's given me every indication that he's going to run it,” Alderson said of the gelding, who will be ridden by Danny Nikolic.

“He's jumping up five kilos, which is a big jump, and it's probably the strongest field he's met. He's drawn wide again, which hasn't seemed to have bothered him so I can't complain about that too much, but he's in good order and I think he'll be competitive again.”

Montgomery will fly the Alderson flag in the $100,000 Banjo Paterson Series Final. The Montjeu gelding finished down the track over 2000m last start, but won a 2400m event at Caulfield the start before and was switched on with a hurdle school last Tuesday.

It is no hindrance that he will be handled by three-time Melbourne Cup winner Glen Boss in the 2600m event.

“He can sometimes put in one of those runs like he did last start when the races aren't run to suit, so I'm thinking this is a lot more suitable race for him on Saturday,” Alderson said.

“We were pretty happy to keep Glen on board, he knows the horse really well, he understands him very well and he's got a record that's second to none over this sort of trip.”

Montgomery is a $17 chance in the market headed by the Terry and Karina O'Sullivan-trained Exceptionally, who is into $4.60 after opening at $12.

The Winter Championship Final, All Victorian Sprint Series Final and Banjo Paterson Series Final comprise half the features on the eight-race Flemington card.