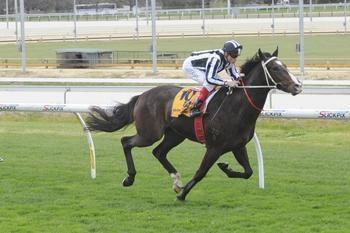 Alderson’s father and training partner Colin Alderson prepared the outstanding performer Sky Heights to finish second in the 1998 edition of the Victoria Derby at just his fifth start. The younger Alderson said connections had planned a Derby campaign for Committed well before his dominant win in the TAB Maiden Plate (1400m).

"Right from the time we let him gallop, he has shown that he has got ability,” she said.

"It’s fairly ambitious to do that in his first campaign and I have said all along that is he gives us any sign that he’s not going to cope with it, we’ll stop.

"He’s got a very relaxed demeanour and if he stays that way, he has got every chance of making it.”

On-course punters backed Committed from $1.75 into $1.30. The gelding gave then no concerns once jockey Craig Williams had him travelling comfortably just off the leaders.

Committed had the Peter Moody-trained Prince Jester covered a long way out before motoring to the line late to score by 2-1/2 lengths.

Committed is a half-brother to the Group III winner That’s The One. That’s The One has won twice at Flemington but struggled at Caulfield in his short career but Alderson hopes Committed will fare better at ‘The Heath’ when he has his next run there on September 22.

"He’s got a different demeanour than his older half-brother,” she said. "He’s a bit quieter and obviously being by Refuse To Bend, he might get over a bit of ground.

"This horse has got a good brain to do it. We’ll see how he pulls up after today, whether he eats up and what he does.”