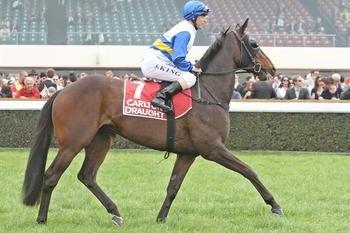 Cleaver had to fight hard but the four-year-old managed post his third win in a driving finish to the Bahcon Steel Handicap (1430m) at Traralgon.

Cleaver had raced fairly with hefty weights at his two runs back from a freshen before trainers Colin and Cindy Alderson decided to step the son of Bel Esprit up in class to Benchmark 72 level to ensure he received a lighter handicap at Traralgon.

The class rise left Cleaver with 54kg, which was the lightest handicap he had enjoyed since he won at Echuca on October 1 while carrying 54.5kg.

Peter Mertens took the ride on Cleaver at Traralgon. The experienced hoop kept Cleaver out of the early speed battle, preferring to settle his mount second last while a decent tempo ensued up front in the five-horse field.

Cleaver remained in touch with the leaders through the middle stages of the $25,000 before Mertens showed all his guile to position the four-year-old to track the odds-on favourite Chilly Reception into the race.

Chilly Reception raced the lead at the 200 metres but Mertens had Cleaver poised to pounce on the favourite.

Cleaver raced up to Chilly Reception at the 150 metres before the pair fought out the race over the closing stages with Mertens preferring  to ride the talented galloper out hands and heels.

His decision paid dividends with Cleaver getting his head down at the right time to score by a nose.