Tarzan I Am swings to big win at Sale 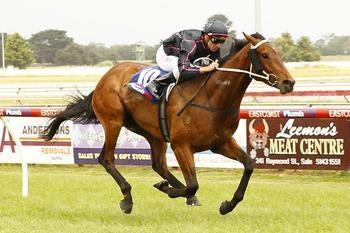 Imposing three-year-old Tarzan I Am underlined his unlimited potential with his emphatic success in the Carlton Premium Dry Maiden Plate (1408m) at Sale.

Trainers Colin and Cindy Alderson thought enough of Tarzan I Am to give him a debut in town over 1200 metres in May before the gelding resumed with a placing over that distance in October.

However, a rise to 1408 metres at Sale produced a major improvement from Tarzan I Am, who simply blitzed his opposition in his maiden win.

Tarzan I Am showed enough dash to allow his jockey Vlad Duric to have him handy to the pace early in the race before the giant galloper travelled beautifully until he joined the leader on the home turn.

The son of Darci Brahma exploded clear early in the straight before he continued to extend his margin in the last 100 metres, scoring by a comfortable 5-1/2 lengths.

“He has always shown us potential but in the couple of starts he has had, he has drawn off the track,” Cindy Alderson said.

“What he did today is what he has shown us in trackwork but for some reason in his first couple of starts, he wanted to run away and do a few things wrong.

“Today with the winkers and a good draw, he was able to control the race and that’s what he did.

Duplicity Jones completed a quinella for Alderson Racing when he finished solidly over the concluding stages.

Click here to see how Tarzan I Am broke his maiden in dominant fashion at Sale.