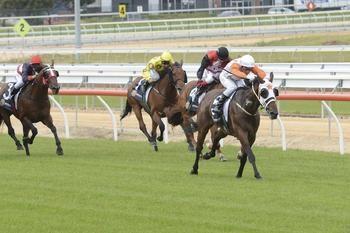 Sapphire Princess broke through for her first win as part of the Alderson Racing team when completing a Mornington double for the team in the Mitavite Handicap (1500m).

The King Cugat mare won three races in New South Wales before joining Alderson Racing but co-trainer Cindy Alderson said the five-year-old presented the stable with a challenge to find her right grade.

Sapphire Princess missed a place at both of her previous starts for the Aldersons but enjoyed little luck at her last start at Sandown on December 5.

“She has been difficult to line up from her New South Wales form,” Alderson, who trains Sapphire Princess in partnership with her father Colin, said.

“I thought her run was maybe a little bit overlooked at Sandown because she ended up in a bad lane. Certainly, the run itself was a forgive run.”

Sapphire Princess began moderately in her Mornington assignment but recovered well enough to enable jockey Vlad Duric to position her perfectly behind the leaders after 400 metres.

Duric had the leaders covered a long way out before getting Sapphire Princess in the clear from the 300, from where she sprinted brilliantly in the straight to score a brilliant five-length win.

“I didn’t think she’d win by five lengths,” Cindy Alderson said. “She got a great ride today and she showed a very good turn of foot.

“There’s plenty of options coming up over the summer and obviously, we’ll see how she pulls up. I just noticed something has galloped on her, probably on the corner when she was held up, wo we’ll just see how that resolves itself.

“I think there’s plenty of mares’ races, even 0-68 races would be suitable for her.”

Earlier, Leonard Express made a terrific return to racing when Ben Melham produced an impressive ride to get him home in the Centrebet Showcase Benchmark 72 Handicap (1600m).

Leonard Express settled with two behind him in the small field before Melham steered him into clear early in the straight before the five-year-old got home to score his first win for 12 months by a neck.

“Some of the owners that were in this horse didn’t want to continue in him but there’s some new people that have got into him and some of the old ones are still there.

“It’s a really good result all round.”

Congratulations to the owners of both horses.

Click here to see how Leonardo Express got home or here to view a replay of Sapphire Princess’s comfortable Mornington victory.