Suspended proves to be a gem at Sandown 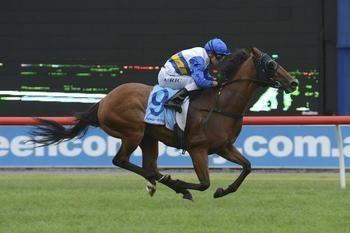 Suspended Gem won a maiden on slow ground at Pakenham during his first preparation but the gelding steadily improved in the subsequent months, developing into a city-class stayer as a four-year-old.

The son of Postponed built fitness with three steady runs before getting up to his right distance for his first start on a metropolitan track on heavy ground.

Vlad Duric partnered Suspended Gem in the $35,000 contest, sending the gelding to race on the back of the early leader for the first mile of the race.

Suspended Gem went to the front at the 400 metres with the stakes-winning mare Rock Robster in pursuit. Rock Robster briefly looked set to pass Suspended Gem with 200 metres to travel but the New Zealand-bred performer drew away late to score by 2-1/4 lengths.

Co-trainer Cindy Alderson said Suspended Gem has plenty of scope to improve with further racing as he had the right attributes to be competitive in much stronger races than his successful midweek outing.

“I think he’s pretty untapped this horse,” Alderson, who trains Suspended Gem in partnership with her father Colin, said. “He’s only lightly-raced and staying is going to be his caper.

“He showed us that last winter (that he could handle heavy tracks) but he also showed that, when the tracks got dry when we brought him back, that he has got a turn of foot on top of the ground.

“Today he showed he can race on the speed as well so he is going to be pretty tractable. I think he is going to make into a really nice stayer when he learns what it is all about.”