Duplicity Jones breaks through in style at Sandown 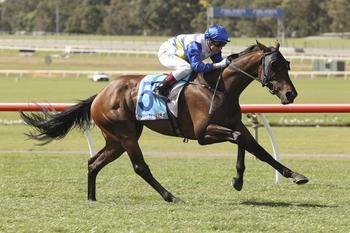 Duplicity Jones showed glimpses of talent during his first seven starts, which reaped five minor placings, before putting the experience gained in those runs to good use in his second city start.

The three-year-old settled midfield for jockey Vlad Duric until he attempted to ease off the fence rounding the home turn.

An initial bid for clear running failed but Duric was able to angle Duplicity Jones around the heels of the front-runners at the 400 metres.

Duplicity Jones accelerated strongly once he found daylight, bursting clear to open a five-length margin, which was only reduced to 3-3/4 lengths once Duric let his mount coast to the post inside the final 50 metres.

The gelding earned a $21,000 winner’s cheque for his connections with his Sandown success but co-trainer Cindy Alderson said better things were likely from Duplicity Jones as he improves with maturity.

“I think he’s going to be a much better horse in 12 months’ time,” Alderson, who trains Duplicity Jones in partnership with her father Colin, said.

“We’ll hopefully give him a good grounding and then he can come back as a four-year-old and be a better stayer then.”

Duplicity Jones has the right pedigree blend to be a successful stayer. He is bred on the same No Excuse Needed / O’Reilly cross as dual Group 1 winner Daffodil while the nick has also thrown the Group 3 winner No Excuse Maggie as well as two Listed winners.