That's The One back to his best at Flemington 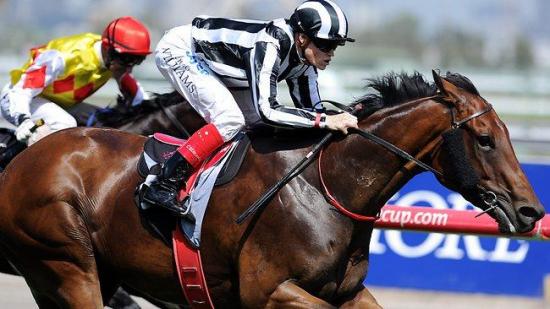 Co-trainer Cindy Alderson says smart galloper That’s The One is on the verge of his best form after his win in Saturday’s fourth heat of the Winter Championship (1400m) at Flemington.

That’s The one showed enormous ability in his early races, winning the Group III CS Hayes Stakes (1400m), but throat problems hampered him in the spring.

“He had a wind op and that held him back last spring. I think he was going to be one of our better three-year-olds,” Alderson, who trains That’s The One with her father Colin, said.

“He’d always been a little noisy in the wind and it just progressively got worse but it didn’t get bad enough to do the operation until last spring.”

That’s The One recorded minor placings at his first three runs back from a break, including a second in the Listed Wangoom Handicap (1200m) at Warrnambool, before improving to claim the $80,000 event.

Jockey Ben Melham rode That’s The One confidently, allowing the son of Snippetson to stride freely handy to the pace but three-wide with cover.

Melham looked around to assess his dangers rounding the home turn before asking That’s The One for an effort with 300 metres to run.

That’s The One sprinted quickly to take control of the event, running home to score a comfortable 1-1/4-length win over Another Prelate and By The Way.

“I think it was a fantastic result. Ben was always confident,” Alderson said. “He (Melham) was having a good look around coming to the corner and Ben gave him a super ride. He rides really well.

“His three runs this time in have all been full of merit but until you get the score on the board, you are always a little perturbed.

“We’ll probably keep going on the natural progression to the (Winter Championship) Final.

“We’ll see what Ben thinks about him but I’d say he’d say he’s strong enough with the way he went to the line today.”

The Aldersons won the same race last year with Chosen To Fly.