Promising Chapkin breaks through at Cranbourne 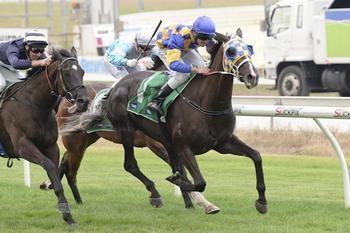 Emerging stayer Chapkin gave a great indication of his potential with his strong win in the Procon Developments Maiden Plate (2060m) at Cranbourne.

The son of Desert King showed his ability with his third to the subsequent city winner Multilateral at Sandown in April 2013 before trainers Colin and Cindy Alderson gave him a winter spell to develop further.

The four-year-old returned an improved galloper with two promising runs at Moonee Valley and Mornington having Chapkin primed to produce his best at Cranbourne.

The Aldersons booked experienced rider Brad Rawiller to guide Chapkin in the $17,500 contest with the jockey letting his mount settle in a comfortable position just off the pace rounding the first turn.

Circumstances around him pushed Chapkin back in the field but Rawiller overcame that when he let the developing prospect stride forward from the 1000 metres.

Chapkin was in contention rounding the home turn but a bump from a rival runner left him momentarily unbalanced with some work to do in the straight.

However, Chapkin was more than up to the task as his last surge got him home by three-quarters of a length.

Chapkin’s first win came at just his sixth outing while bonuses took his earnings for the night to $16,800, boosting his stakes tally to more than $25,000.

Congratulations to Chapkin’s owners on what Alderson Racing expects will be the first of many winners with the exciting performer.