Persistence pays for You Tell Me at Mornington 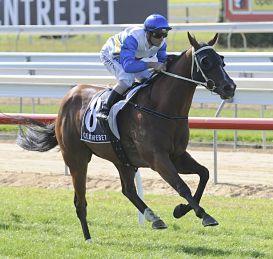 A smart speed throughout was enough to give You Tell Me a deserved success in the National Patient Transport Rising Stars Rating 62 Handicap (1532m) at Mornington.

The race was restricted to apprentice riders with 2kg claimer Josh Cartwright booked to ride You Tell Me but the youngster got the job done in impressive fashion.

You Tell Me started from barrier 10 but Cartwright managed to get You Tell Me to settle behind the speed, with cover, before the field had gone 150 metres.

A strong speed prevailed up front but You Tell Me relished the pace, travelling perfectly for Cartwright before the jockey eased the son of Jungle Pocket to make his challenge rounding the home turn.

You Tell Me showed no signs of tiring in the straight as the four-year-old powered to a solid victory by a half-length, breaking a winning drought.

You Tell Me had not won since he broke his maiden at Mornington in April 2012 but has been a consistent member of the Alderson Racing team, rarely running a bad race.

You Tell Me had performed well in the city with a second at Caulfield and fourth at Flemington, running good races around smart metropolitan horses in previous seasons.