First of many wins for Roxanne Of Sydney 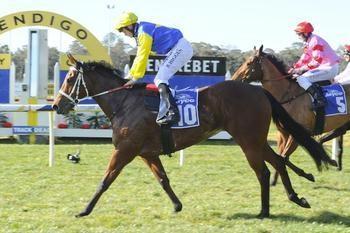 Alderson Racing has unearthed another talented galloper by champion stallion Zabeel after Roxanne Of Sydney posted her first victory in the Centrebet Maiden Plate (1600m) at Bendigo.

The Aldersons trained Zabeel’s superstar son Sky Heights to win four Group 1 races and more than $4 million in prizemoney in a brilliant career that included wins in the AJC Derby and Caulfield Cup in 1999.

The stable also won the Group 1 Thousand Guineas with Zabeel’s classy daughter Inaflury and prepared the sire’s son Our Unicorn to score at Group 3 level.

Roxanne Of Sydney showed her ability with two solid runs over shorter trips before relishing the step up to 1600 metres in her latest assignment.

Jockey Brian Higgins positioned the four-year-old midfield before she asserted her dominance in the straight to score by 1-3/4 lengths.

Roxanne Of Sydney’s impressive win pleased Higgins but he said the mare had the potential to improve with the education of her first victory.

“We’re still trying to work her out. She does tend to overdo things a little bit,” he said.

“She did it again today. She just wanted to pull me into the race when they slackened off a little bit.

“I think that has put her in good stead for next time when we try to teach her to relax because she’s got a good turn of foot when she does.”

Roxanne Of Sydney earned a $10,500 winner’s cheque for her success, taking her earnings to more than $14,600 in her three starts.