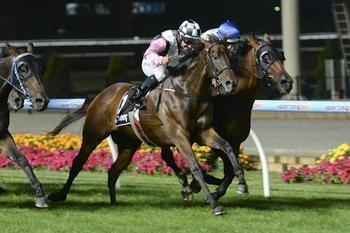 Jockey Damian Lane continued his profitable association with Mariner when he drove the stayer along the inside to claim the EJ Whitten Foundation Handicap (2500m) at Moonee Valley.

Lane partnered Mariner to his last win at Mornington in December 2013 before getting back aboard the son of Volksraad after missing his previous two starts.

Mariner jumped smartly from barrier one, leaving Lane able to give the six-year-old a comfortable run behind a moderate speed for nearly the entire trip.

The cosy run almost turned into a trap for Mariner when he ran out of room approaching the home turn before Lane guided the gelding through a narrow opening to get home narrowly.

Co-trainer Cindy Alderson said one of Mariner’s owners thought he was the cause of the horse’s odd habits, hiding from sight until the handy galloper left the mounting yard.

Alderson said Lane has the knack of getting the best out of Mariner.

“He’s a frustrating horse,” Alderson, who trains Mariner in partnership with her father Colin, said.

“Damian has got a bit of an affinity with him. He’s a quirky little fellow.

“He only just got there but he was determined in the finish and it was good to see.

“He did have a beautiful run in transit but you have still got to ride for that bit of luck and it came tonight.”

The Moonee Valley success was Mariner’s first city win and earned him a $21,000 winner’s cheque, taking his stakes tally to more than $80,000.

Congratulations to Mariner’s owners on their latest success.