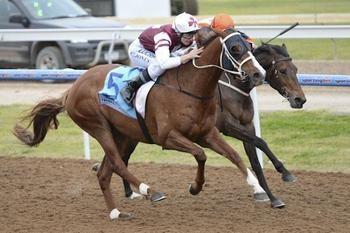 A short freshen made all the difference for The Tinker’s Son as he bounced back to winning form on the Geelong Synthetic track.

The Tinker’s Son failed to beat a runner home in three Benchmark 70 races, including two in town, before trainers Colin and Cindy Alderson gave the gelding a short break.

The Aldersons brought The Tinker’s Son back to the races in Benchmark 64 company in the Sportingbet Winter Challenge Handicap over the 1900-metre distance.

The Cranbourne-based stable booked apprentice Caitlin Jones to take 3kg off The Tinker’s Son’s back and the move worked perfectly as the young rider handled the five-year-old perfectly.

The Tinker’s Son settled in the second half of the field from barrier eight but Jones was unconcerned, even when the son of Niello found himself racing three-deep with cover.

Jones let The Tinker’s Son improve gradually from the 1000 metres to be within range of the front-runners approaching the home turn of the $15,000 contest.

The Tinker’s Son worked through his gears to hit the front inside the 100 metres before going on to score by a half-length at the long odds of $41.

The win was The Tinker’s Son’s first since in Seymour success in November last year and his third overall from 11 starts.

Congratulations to The Tinker’s Son’s owners and all involved with his return to form.