The Secret thunders to another Geelong Synthetic win 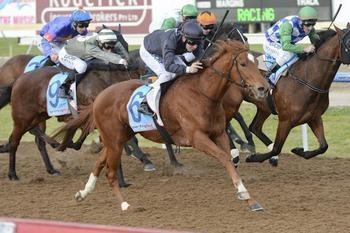 The Secret scored a dominant first-up win on the Geelong Synthetic track on June 3 but little went her way on soft ground at Flemington at her next outing.

Trainers Colin and Cindy Alderson selected the Bay Building Services Benchmark 64 Handicap (1000m) as the perfect assignment for the three-year-old and engaged top jockey Ben Melham to ride the filly.

Melham steered The Secret to her first-up win before resuming the ride when the she returned to his weight range in the Geelong event.

Melham let The Secret find her feet back in the field while a strong gallop prevailed up front and remained cool when she was still among the tailenders turning for home.

The Group One-winning rider knew he had a talented mare underneath him and The Secret again showed devastating acceleration to reel in the front-runners easily.

The Secret made up eight lengths in a matter of 250 metres before her momentum carried her to an emphatic 1-¼ length success.

The Sakhee’s Secret filly’s latest win was her second since joining the Aldersons from New Zealand in 2013.

Congratulations to all involved with The Secret’s latest success.