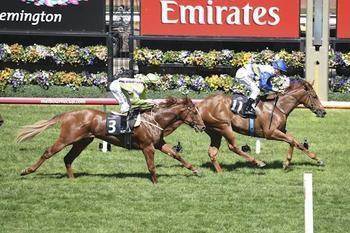 Unknown factors surround the first two-year-old races of any season and training partners Colin and Cindy Alderson had their share of queries about Mihalic’s ability to cope with race pressure.

”She’s trialled really well but she’s never been put off the bridle so it was always going to be interesting,” Cindy Alderson said.

Mihalic had the benefit of a jumpout at Flemington September 26 and the practice down the straight aided the Hard Spun filly’s chances in the $120,000 contest.

The winner settled midfield but circumstances forced jockey Mark Zahra to ask Mihalic to quicken sooner than anticipated but that made little difference to the result.

Mihalic responded well to Zahra’s urgings to hold the late challenge of the runner-up Iceflow, also by Hard Spun, to score by three-quarters of a length.

“I think it was fantastic to have that opportunity to come down the straight and she’s had a couple of jumpouts at home and she’s handled them really well,” Alderson said.

“When he (Zahra) went on her with the long run early, the fact she has been down here (the Flemington straight) stood her in good stead.

“She had enough in reserve and she looked to be holding them comfortably.”

Alderson said Mihalic was a natural two-year-old that had coped well with her first racing preparation. The Cranbourne trainer said Mihalic would return to Flemington for a race on Melbourne Cup day if she pleased the stable with her recovery from her debut.