Finally some luck for San Amaro 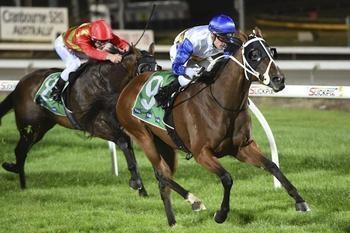 The best way to stay of trouble is to race on the pace and that approach paid off for San Amaro at Cranbourne.

The Colin and Cindy Alderson-trained galloper had no luck at his previous two runs at Moonee Valley, featuring in the stewards’ report for being blocked for a run on both occasions.

Alderson Racing took the three-year-old back to his home track for the Peter Horobin Saddler BM64 Handicap (1300m), with jockey Mark Zahra continuing his partnership with the son of Henrythenavigator.

San Amaro drew the outside gate, which left Zahra with little option than to ride the three-year-old positively, pushing him forward to race outside the early leader Ruettiger.

San Amaro was going well when he challenged Ruettiger early in the straight but the pair bumped at the 200m, which cost San Amaro a little bit of momentum.

However, San Amaro quickly regained his balance before drawing away late to beat a smart Benchmark 64 field by 1-¾ lengths.

The win was San Amaro’s second from five starts but his record could be a little better with any luck.

Congratulations to San Amaro’s owners and all involved with the promising galloper’s latest win, which took his stakes tally to more than $29,000.