Now a stakes win for brave My Poppette 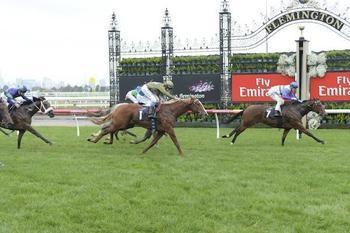 My Poppette gave a glimpse of staying ability in her strong win in Saturday’s Listed Anzac Day Plate (1400m) at Flemington.

Trainers Colin and Cindy Alderson hope to get the Snippetson filly to the Group I VRC Oaks in the spring and My Poppette showed she could stick on strongly with a determined effort to notch up her second success.

“You’d have to give her an opportunity (in the spring),” Cindy Alderson, who trains My Poppette in partnership with her father Colin, said. “We’ve always felt she’ll get over ground so we might consider a race like the Oaks.”

A wide gate left jockey Mark Zahra with no option than to let My Poppette find her rhythm out three-wide on the speed.

My Poppette hit the front early in the straight but found plenty in the last 200m to record her maiden stakes win by a length.

The fact My Poppette was a homebred for the Alderson family added further excitement to the bay filly's wonderful effort.

“It was a tough ask from that barrier,” Cindy Alderson said. “Mark was pretty confident on her and he let her stride forward.

“She was travelling for a long way. She hit the front pretty early but she had a lot left.

“I think the cut in the track is also going to work in her favour long term.”

Alderson said My Poppette would head to the spelling paddock for a break before returning to prepare for her spring three-year-old campaign.

Congratulations to all involved with Alderson Racing's latest stakes victory.