All Aussie gets it all right on debut 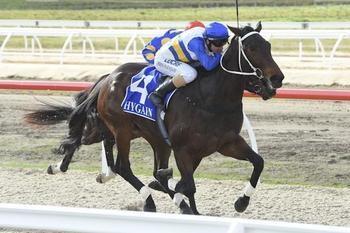 Small fields can be a trap for many gallopers but All Aussie had little trouble disposing of her four rivals on debut on the Pakenham Synthetic track.

All Aussie showed trainers Colin and Cindy Alderson plenty of ability in her excellent trial win at Cranbourne in May but another seven weeks elapsed before the stable produced the filly on raceday.

The impressive barrier trial ensure All Aussie started as an odds-on favourite in the JJ Richards 3YO Maiden Plate (1000m) but the daughter of All American justified the short quote with a dominant performance.

In-form jockey Chris Parnham rode All Aussie in her trial and stuck with the promising performer at Pakenham and was content to let the well-built filly settle fourth of the five but only three lengths from the lead until the home turn.

Parnham let All Aussie stride into the race entering the long Pakenham Synthetic straight before she worked through her gears to hit top speed at the 200m.

All Aussie mowed down the leader at the 100m before drawing away to score a soft one-length win to open her career in the perfect fashion.

All Aussie was the latest foal out of the former smart sprinter Palaris to score carrying the white, blue and gold colours of Alderson Racing, joining her stakes-placed half-brother Del Palio, Devil Woman and Ourpalarchie as winning progeny of the mare.

Congratulations to All Aussie’s owners and all involved with her outstanding debut success.